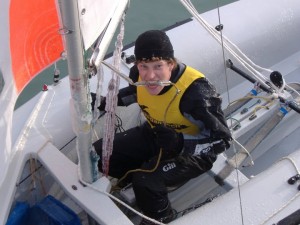 Tim Mcelreath treating himself to a popsicle as he de-rigs

Saturday challenged every sailor with freezing conditions and winds at 15 knots
gusting to the upper 20’s. Courses were W4s. Athletes were brushing ice off their shoulders after
rotations and all were challenged by freezing lines and blocks throughout the day.

Sunday proved to be another cold day with winds between 10-15 knots with an occasional gust to 20.
Courses were W4s, until the last A-division race where the race committee chose a W6. Awards were given to the top 3 schools, as well as the top three finishers in each division.